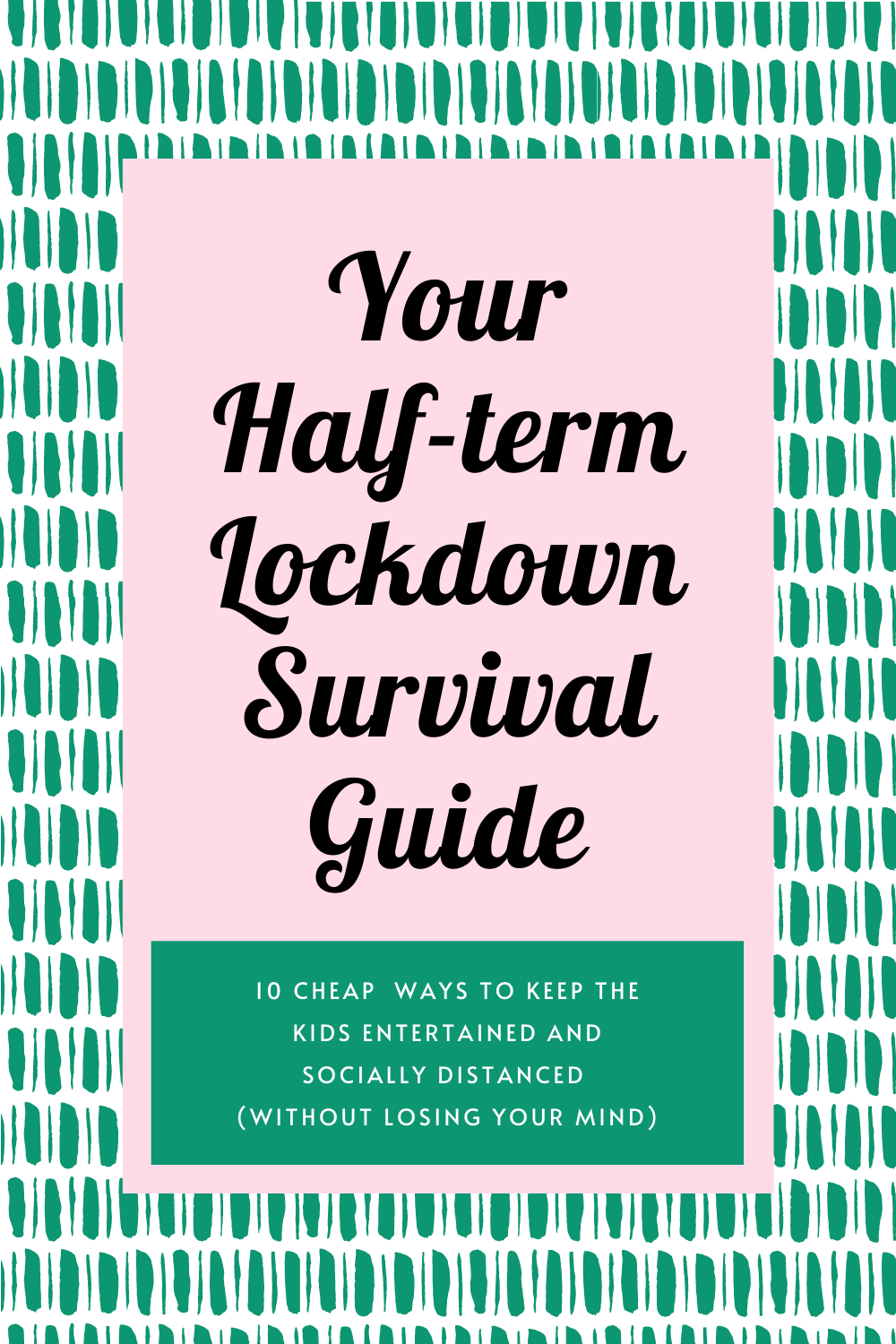 Parents, I know what you are thinking: half term holidays during a global pandemic doesn’t sound that fun.

To make matters worse, the weather is set to be pants. Normally, I live by the motto that there is no such thing as bad weather, just the wrong clothing. But after seven months of walks, I am struggling to get pumped for another stroll in the countryside.

But, there’s nothing that we can do about the government restrictions – so we might as well do what we can to get through to bedtime with our nerves in tact.

With this in mind, I’ve pulled together 10 ways to keep your kids entertained over half term while maintaining social distancing.

All of these are either super cheap or free – and the best part? They shouldn’t require too much adult input or supervision once the kids get stuck in – so you can grab that cuppa you’ve gasping for all day.

MAKE YOUR OWN PLAY DOUGH 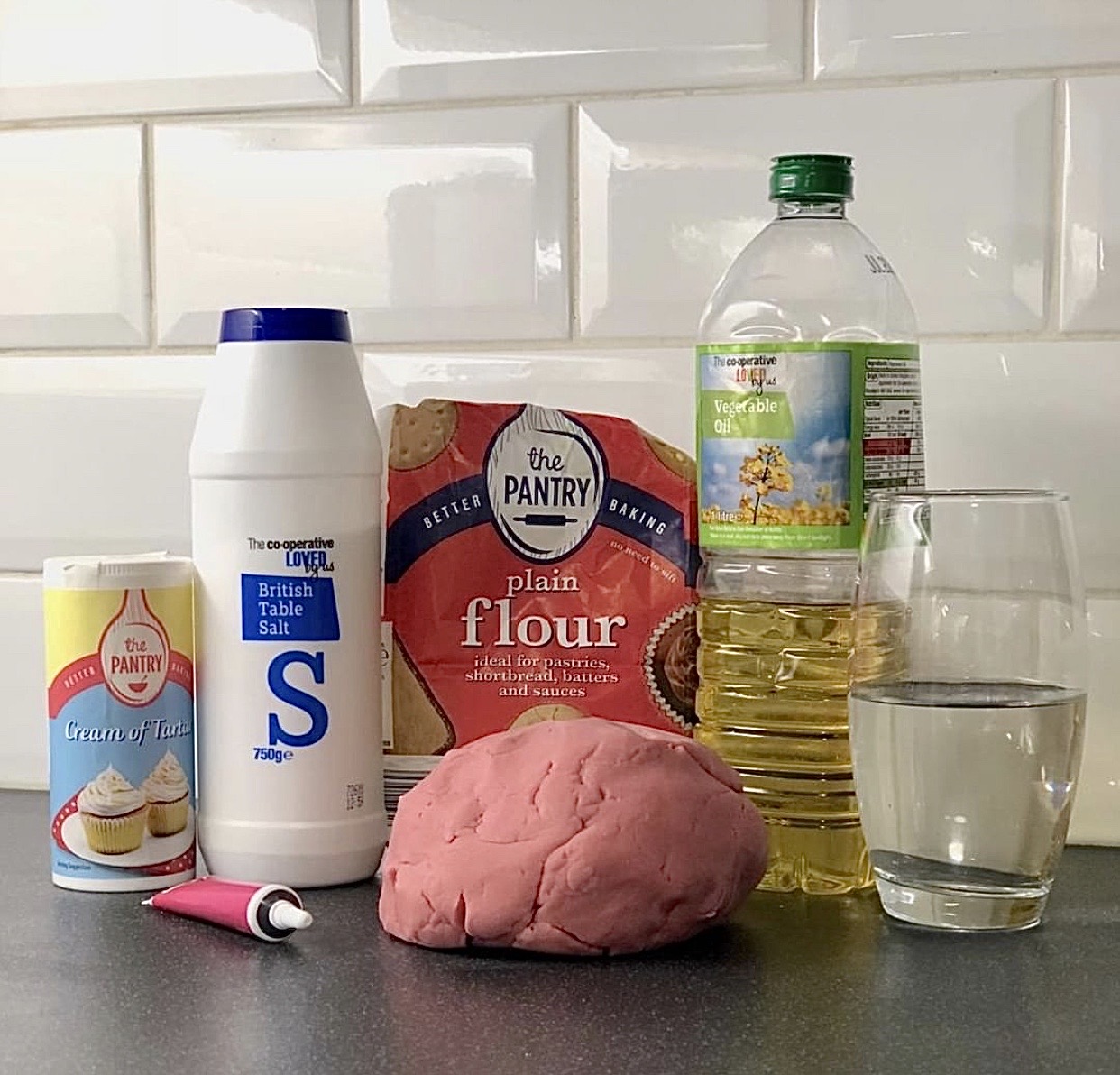 Ask any child if they love a bit of play dough, and you will hear a resounding “yes!”

But there is no need to shell out the cash to stock up your supply of the modelling clay – you can make your own from ingredients that you already have stored in your baking cupboard – all you need is:

I grew up with a primary school/nursery teacher as a mother, so here is the recipe that she passed on to me when Audrey was little.

The recipe below makes a generous amount and even if you had to make a trip to the supermarket to get your ingredients, it would only set you back £4.45 at Sainsbury’s‘s, for instance.

Plus, the bits can be used time and again to replenish your stocks.

What’s more, this recipe is so easy that even those who can’t cook (I’m looking at me here!) can do it without trashing the kitchen.

Plus, it only takes a couple of minutes to make, so the kids will be soon having fun in a flash.

Here’s how to do it:

RUSTLE UP SOME RAINBOW TOAST 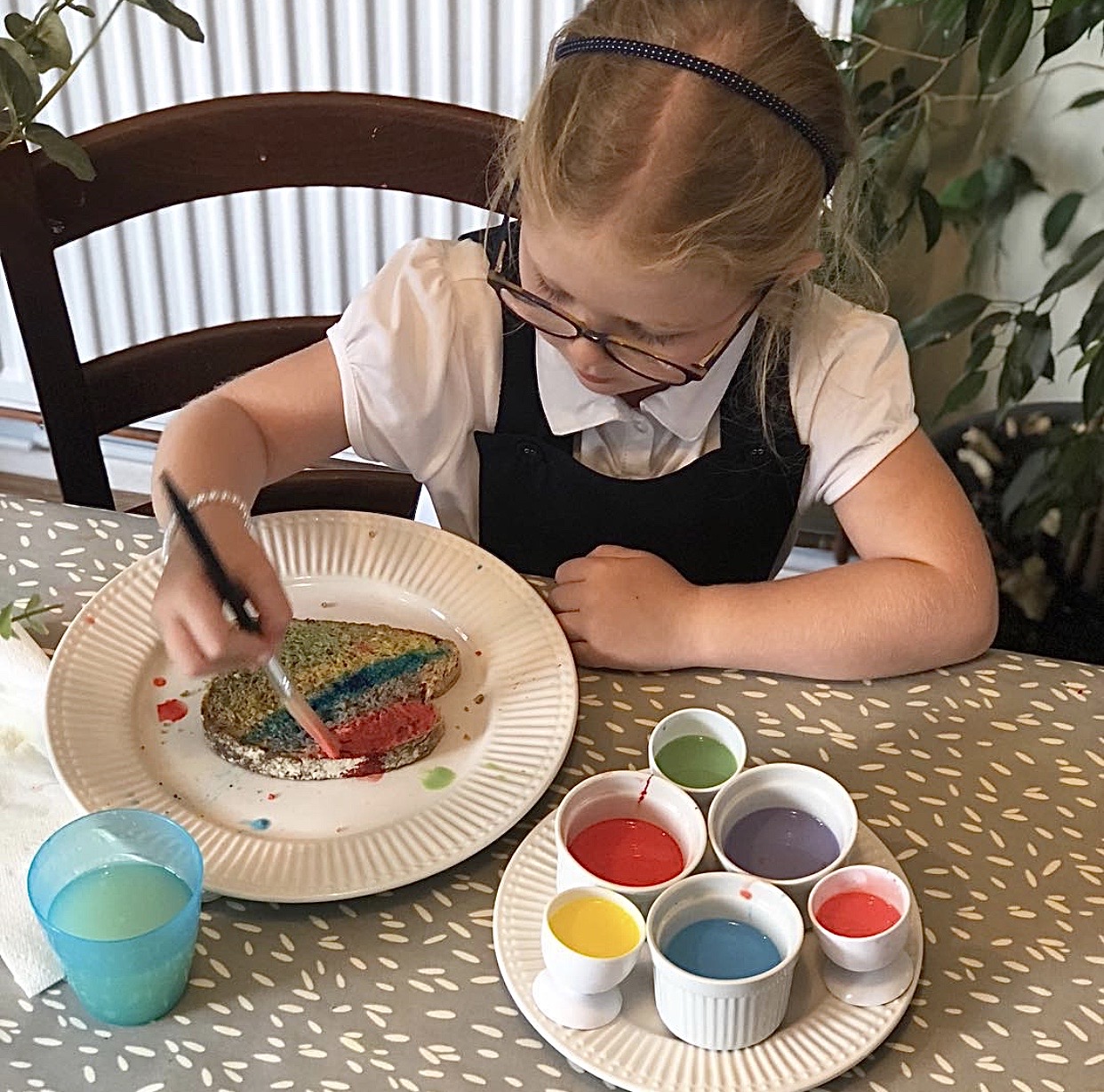 Want an activity that requires very little prep and clean up?

Oh, and one that will also count as a morning snack too?

Look no further than “Rainbow Toast”.

Just pop some milk into ramekins, add some food colouring and let your little one loose on the bread with a clean paintbrush.

Toss the slice in the toaster – and voilà! Your kids thing you’re amazing! 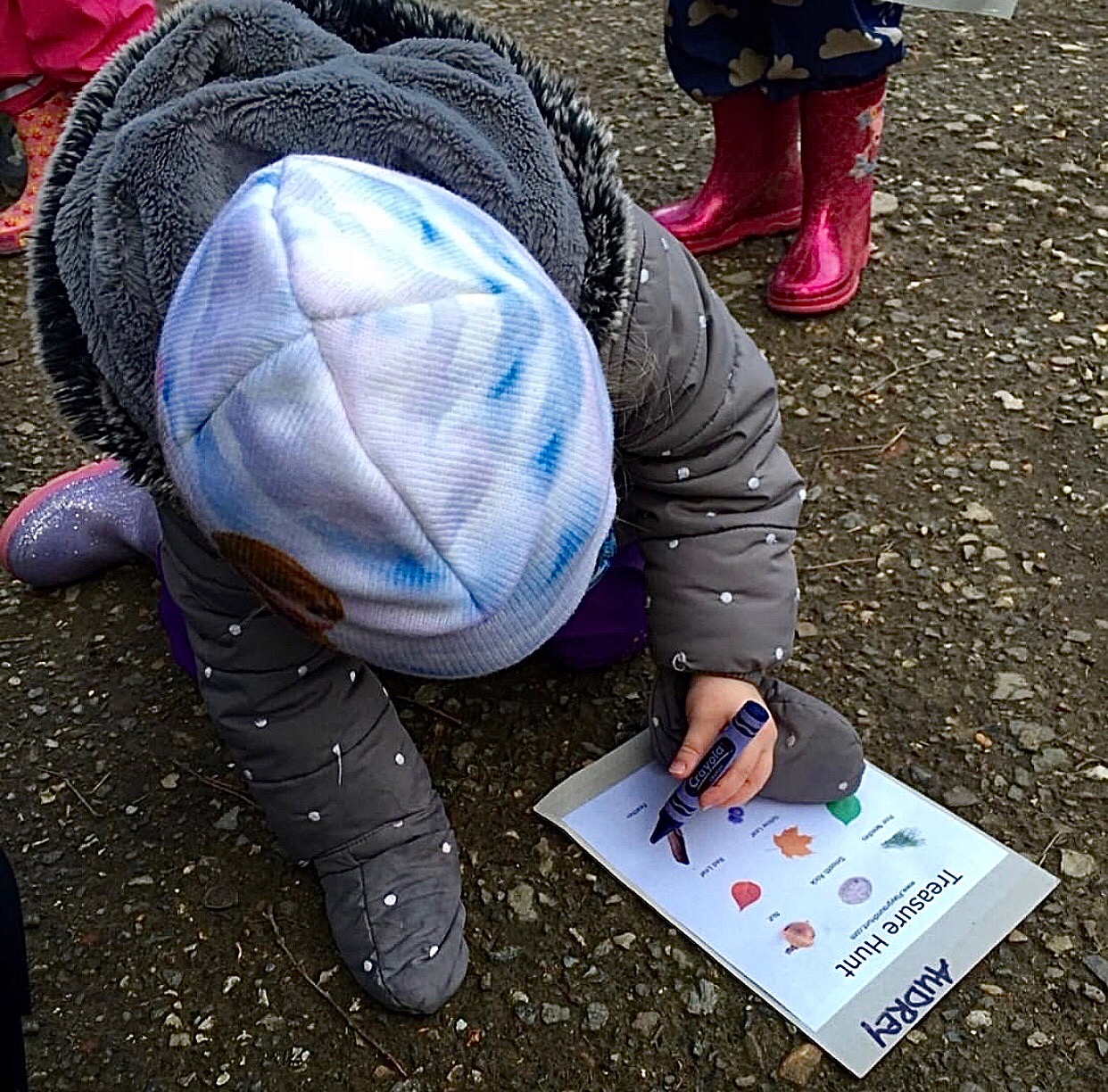 One way to get the kids out of the house and into some fresh air is with an Outdoor Nature Scavenger Hunt.

We’ve been at it for years, I think Audrey is about three years old in this picture.

All you need is the woods, a piece of paper, a printer and a pencil. Oh, and to dress according to the weather.

I often turn to the Woodland Trust – nature detectives for free printable scavenger hunts – or Pinterest has tons of free downloadable options for different age groups. 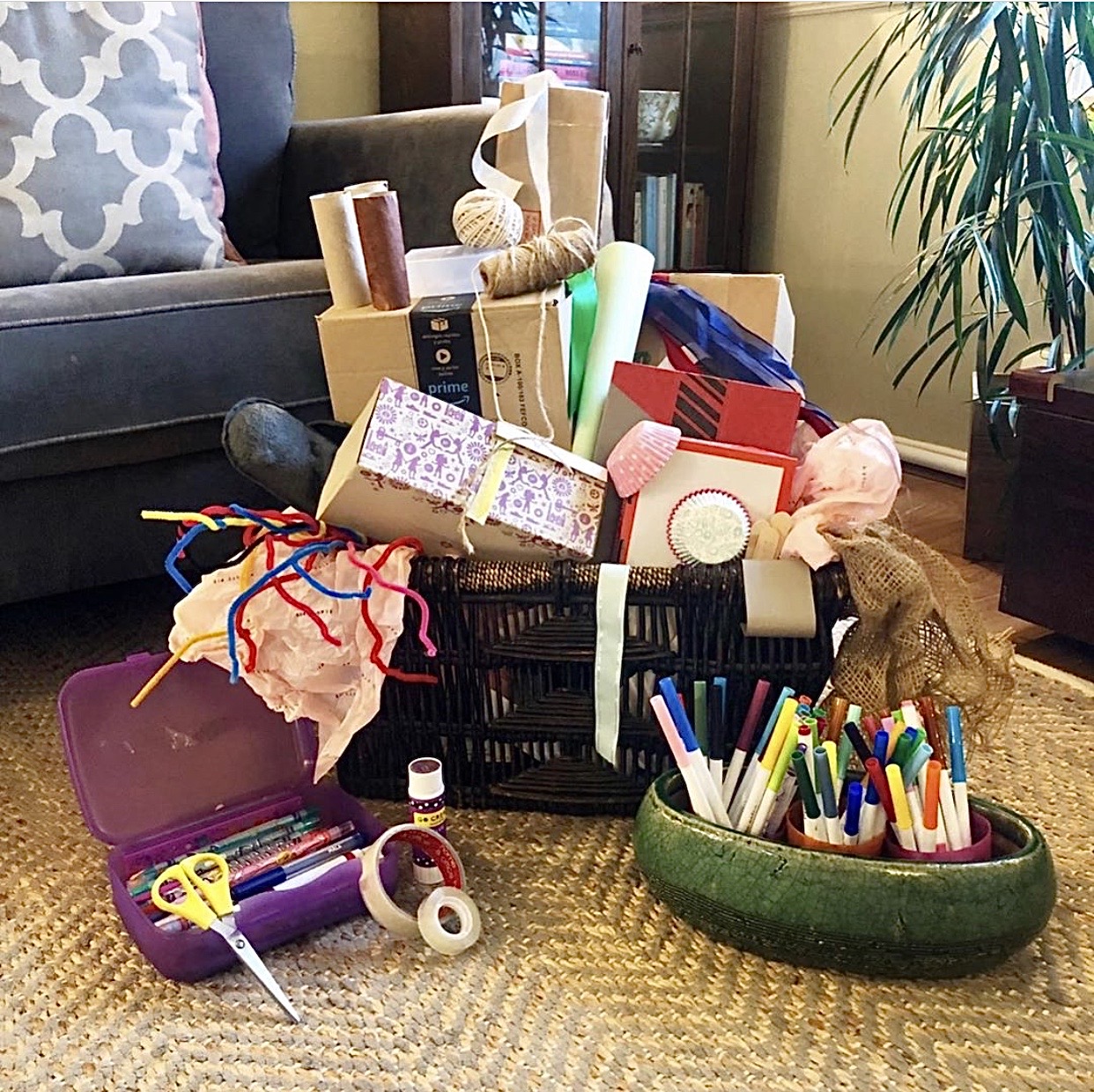 Not a week goes by that she doesn’t show me some invention that she has rustled up from bits around the house.

“Ah ha!”, I thought – I need a cheap way to keep the kid entertained – and out of the trash.

So, I gathered up bits around the house (boxes, ribbons, tissue paper etc) and popped it all into a posh-looking basket.

It didn’t cost a penny, keeps her busy for ages – and out of the bloody bins to boot.

The only problem now is all the “inventions” cluttering up the place.

SET UP A POTION STATION 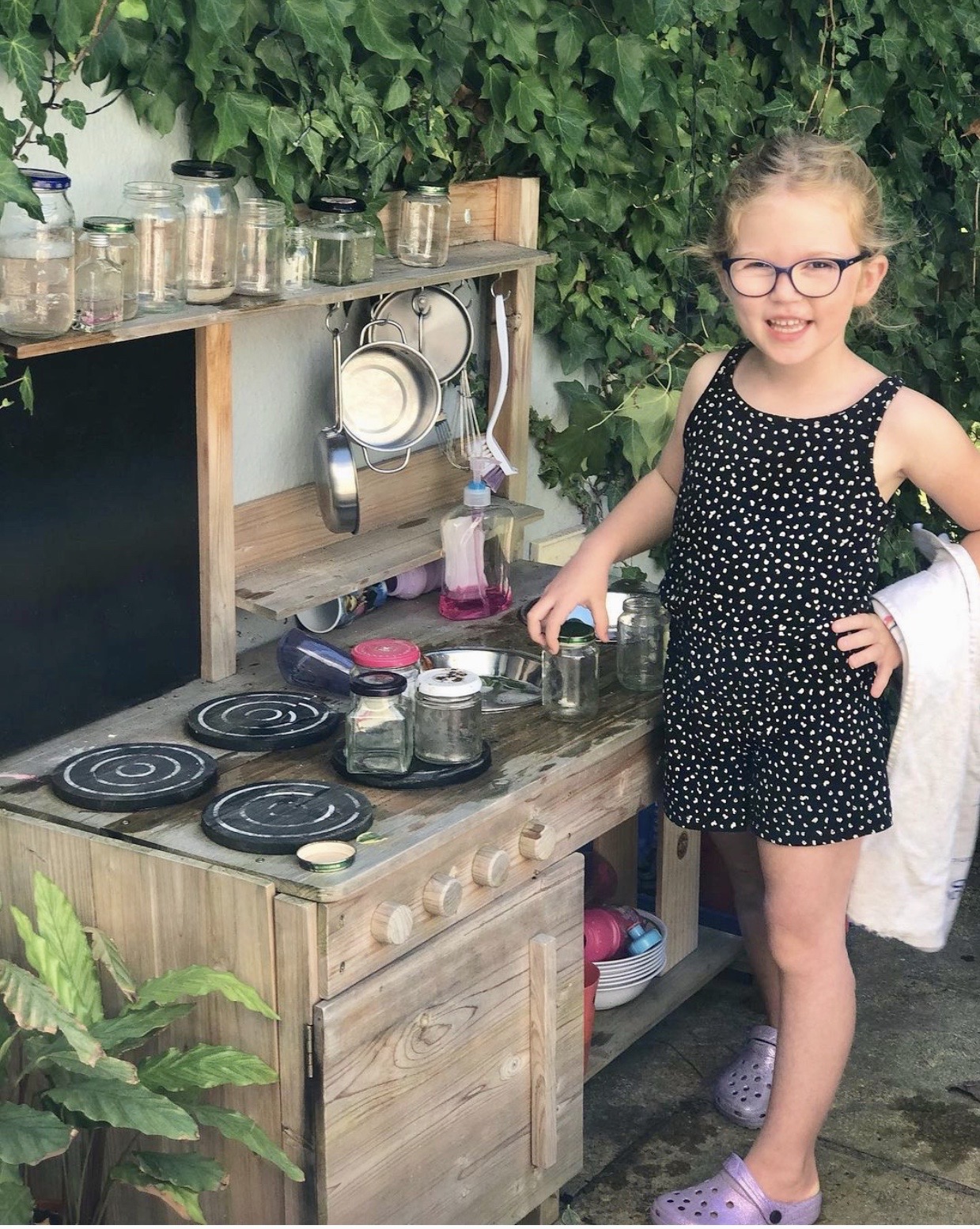 I had been hoarding glass jars in my garage since I was pregnant and optimistically thought I would make preserves/jam on maternity leave 😂
⁣⁣⁣
(I also signed a book contract thinking I would write that “while the baby slept” ) ⁣⁣⁣
⁣⁣⁣
So, I broke out the jars, we filled up an egg carton with “ingredients” from the garden, grabbed some eyedroppers from the craft cupboard, threw in a half-empty bottle of hand soap and boom! It’s all hocus pocus time! 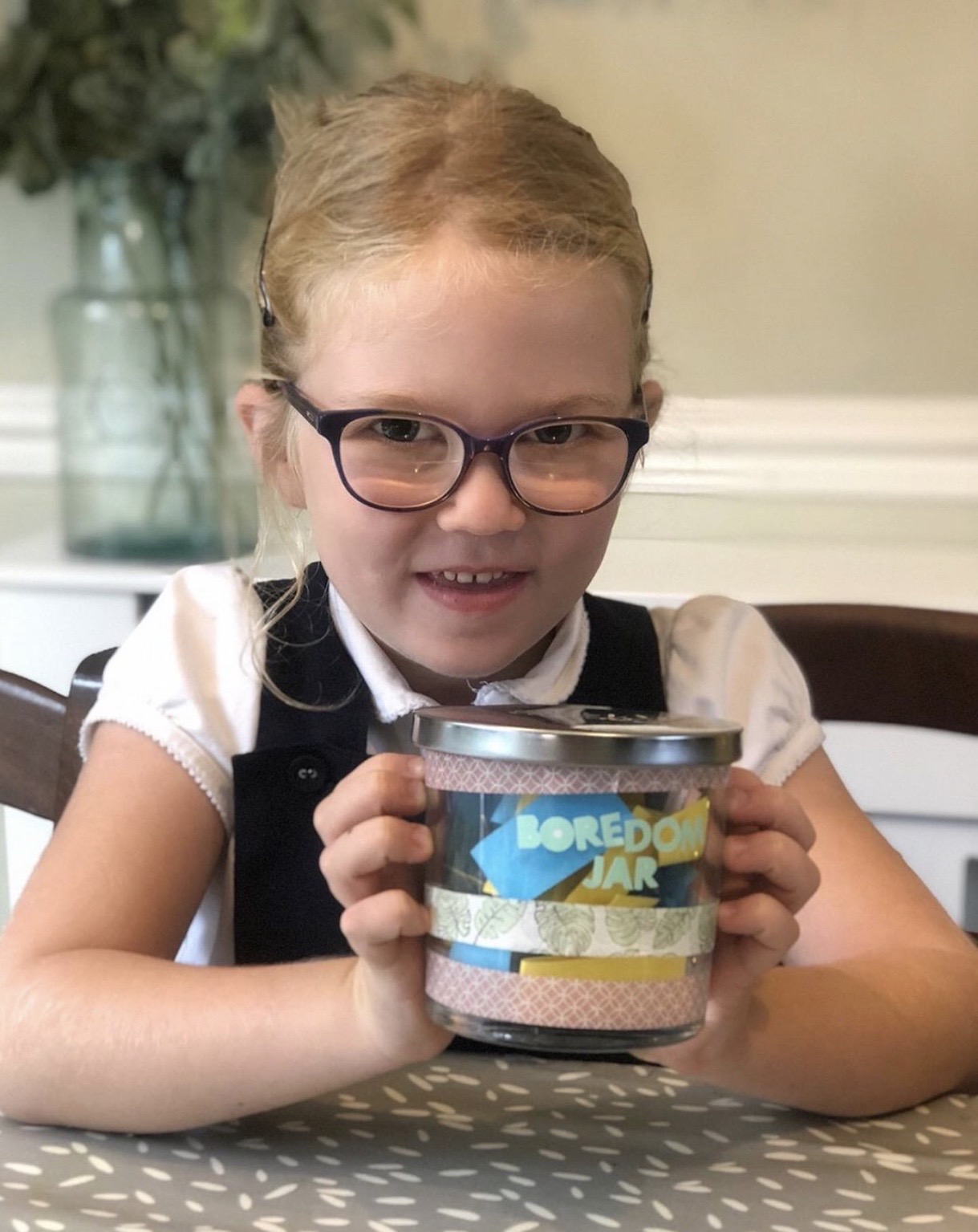 Ask any parent for the two most annoying words to hear coming from your kids and I bet we will all agree. ⁣⁣
⁣⁣
“I’m bored!”⁣
⁣⁣
While I think that there are times when it’s good for kids to be bored, there are also moments when you want to shake things up a bit but you’re feeling low on inspiration. ⁣⁣
⁣⁣
So a while back, Audrey and I made a “boredom jar”. We filled it up with fun activities for when she feels like there is nothing to do.

What’s more, all the suggestions had to be FREE!⁣
⁣⁣
So, whenever Audrey complains that she is bored, she can pull a good idea out of a hat – or a jar, for that matter.⁣⁣
⁣⁣
All you need a a glass jar – here we used an empty Aldi Jo Malone dupe candle jar – some stickers and a few pieces of coloured paper.⁣⁣
⁣⁣
Brainstorm together, write down the ideas on the small strips of paper – yellow for sunny weather and blue for rainy days – then tuck them away for a day when you need a little extra creativity.⁣.

A word of warning: think carefully about what activities that you suggest if you want the kids to play independently while you get on with work or chores.

I made the mistake of using options such as a spa day which meant that while Audrey was enjoying relaxing, I was busting my backside providing manis and pedis.
⁣ 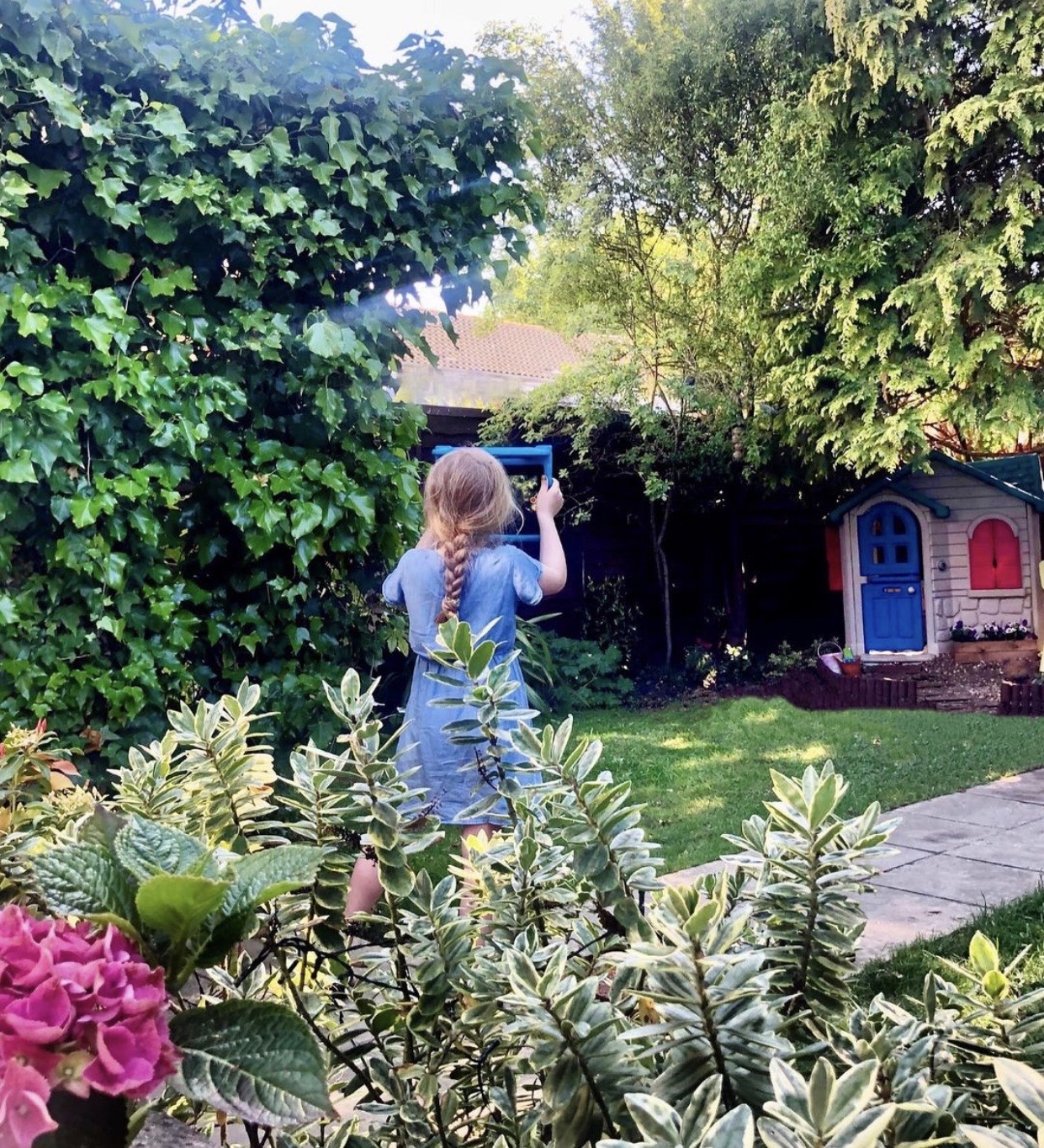 One side effect of being forced to stay at home during the first lockdown was that that we noticed all the brilliant birds in our garden.⁣

(I know what you’re thinking – boring! – but bear with me here)
⁣
Not only does Audrey love filming the little fellas (and I call it a science lesson natch!) but I printed off a birdwatching bingo chart from the Woodland Trust and it was an activity that kept her busy off an on for a few days.

We even took the sheet with us on walks to try and get some of the harder birds ticked off.
⁣
Of course, I did it all in the name of homeschooling but deep down inside, there were a few months there where I became secret twitcher.⁣ 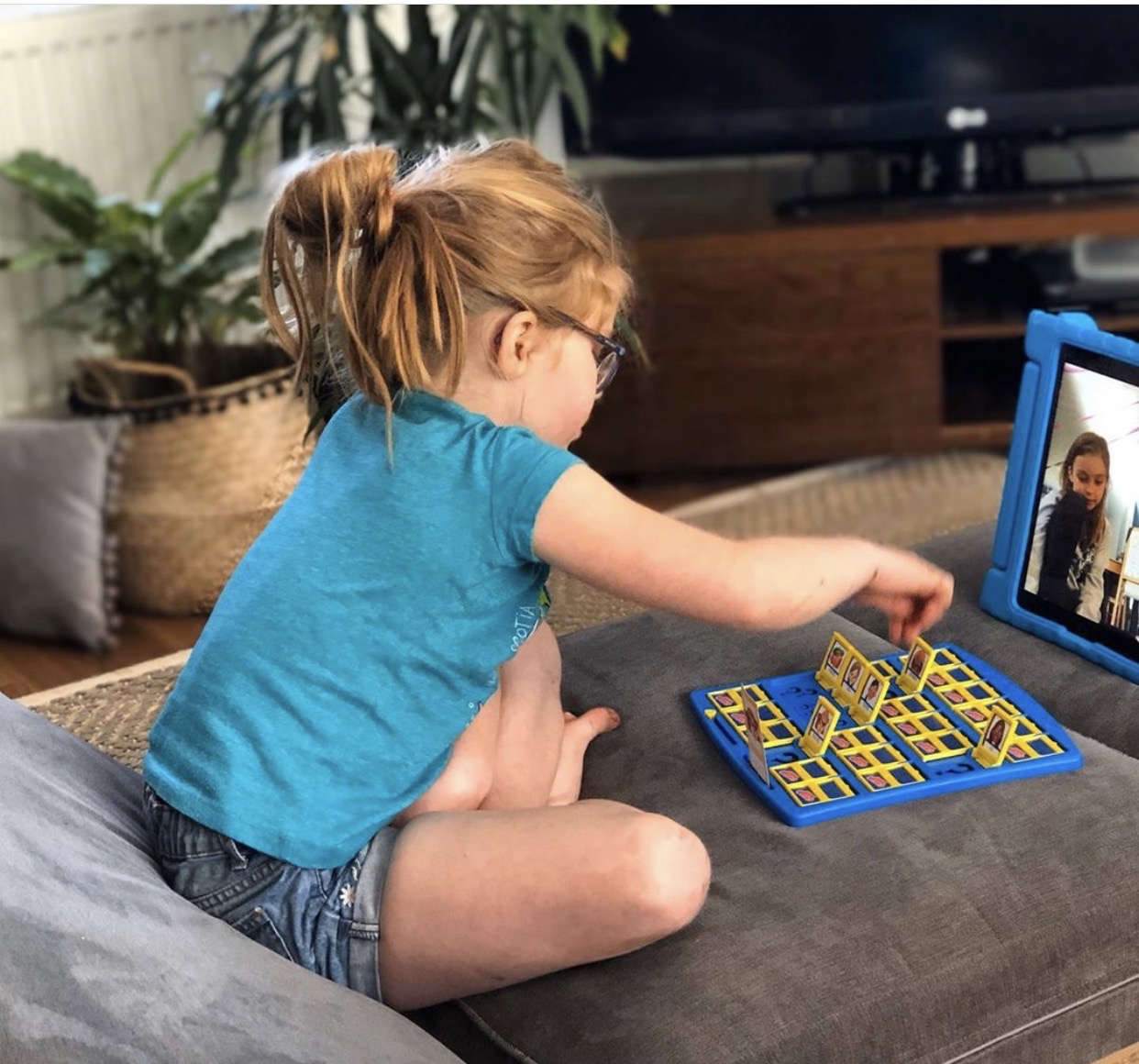 Turns out, kids can happily play physical board games together on Facetime or Zoom.
⁣⁣
Audrey loves to play Guess Who with my best friend’s daughter in Nova Scotia, Canada.⁣⁣
⁣⁣
It keeps them busy for 45 minutes and both being only children, the two girls love the interaction – and we mothers loved the peace and quiet.

This Spring, Audrey and I made a fairy garden from the bits that were waiting to go into the garden waste bin and used all sorts leaves, needles and stones. ⁣⁣
⁣⁣
We chucked in a fairy door from her bedroom and some dolls and boom – job done.⁣⁣
⁣⁣
Truth be told, she hasn’t actually played with it once after it was built. But, as ever, I remain optimistic.
⁣⁣
If not, it didn’t cost me a penny and meant I felt completely guilt free about the screen time that immediately followed.

GROW VEG FROM STUFF IN YOUR FRIDGE

Earlier this year, Audrey was desperate to plant some vegetables, but needless to say, during Lockdown getting my hands on seed packets was harder than finding a bottle of unicorn tears – impossible.
⁣⁣
But, I remembered how @primaryteachuk sourced seeds straight from her fridge – so off we went!⁣⁣
⁣⁣
We managed to find lots to plant in some old empty pots I found in the shed, but can use any containers that you find in your recycling bin.⁣
⁣⁣
A quick look in the kitchen and we found seeds in tomatoes and apples, plus a bunch of potatoes that had sprouted. ⁣
⁣
Getting carried away, we broke up a bulb of garlic and popped the cloves into some compost.⁣⁣
⁣⁣
The icing on the cake (aka the thing that elongated the amount of time it kept Audrey busy) was I set it up as if she had her own gardening show and she loved it.⁣⁣
⁣⁣
At the time, I wasn’t even bothered if anything actually grew – after all, it killed an hour and the whole activity was free.

But guess what? Those little seeds became actual plants – and I felt smug AF.

Don’t think that you can’t get our your green thumb just because its October either, pop those containers on a window sill and watch the fruits of your labour grow.