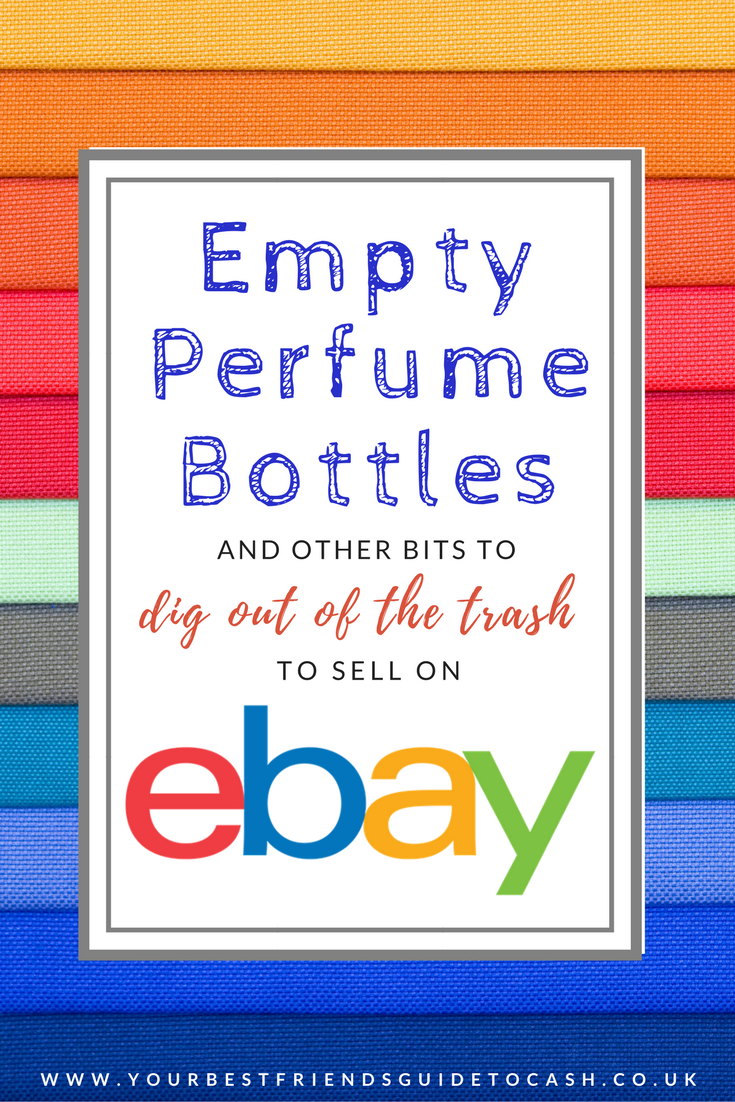 It all began with an innocent search for Diptyque candles.

And the you wouldn’t believe what I found…  Once these beautiful candles melt, people are actually flogging the empty glass jars for as much as £24 – recouping 53% off the £45 cost of the 190g item itself. My mind was blown.

If you want to make a bit of extra cash in the run up for Christmas, why not have a clear out of your cupboards, a little look in the loft or simply refrain from tossing out your rubbish –  AND GET THAT STUFF ON EBAY. You would really be turning your trash into someone else’s treasure – and wind up rolling in the dough when you’re done.

A quick look on the sold listings on eBay and I found an empty Jo Malone Lime, Basil and Mandarin glass jar sold for £14.95 including postage. Throw in the matching box and gift bag, or a larger jar and you will fetch even more in an auction.

You can even sell an empty Yankee candle jar, for around £5.10 all in, but when you consider that the actual candle is currently being sold at Boots at £15.99, that is a recoup of 32% of the initial cost.

If you have an iconic jewellery box going spare, you could be quids in if you list it on the auction site. For instance, an iconic red Cartier ring box with the outer sleeve and bag went for a total of £59 in October, while a duck-egg blue Tiffany ring box with outer box sold for £54.50, with postage included. That’s a lot of money for a box.

If you have a soft-spot for swish shoes, why not sell the boxes and score some extra cash?  In November,  an empty Christian Louboutin shoebox sold for £21, while a Balenciaga empty shoe box and dust bag went for £24.90.

Rather than chucking your empty cardboard tubes into the recycling, collect them to sell, because crafters go crazy for them – in October, a box of 50 tubes sold for £7 including postage. Not bad going if you ask me.

If you live in a house like mine, you probably have a collection of remote controls that no longer work or are no longer needed thanks to constant upgrades. So go gather them up, dust them off and list them on eBay. A quick look at recent sold prices shows that you can get as much as £7.60 for a single Sky remote, including postage. If you happen to have one of the limited edition themed models, such as Frozen or Star Wars, you can make twice that amount.

Today is the first day of December, and people across the country will be happily opening the first door on their Advent Calendar. If you were lucky enough to get your hands on a luxury version, make sure that you hang on to it once it is emptied at the end of the Christmas countdown – you could sell it and make a pretty penny.

Last year’s Liberty Beauty Advent Calendar, for instance, recently sold for a total of £28, even though it was completely empty. While the much-coveted Jo Malone Advent Calendar of 2016 sold, for £55 at the end of October, without a single product remaining in the drawers. Shocking, I know.

Department store such as John Lewis and House of Fraser are often handing out free samples at their cosmetics and fragrance counters to lure you in to making a purchase. Shops such as Boots, will give freebies when you buy a certain amount of a brand name product while magazines are often sold with a gift on the cover.

If you get your samples in a nationwide promo and you are in no rush to sell, it can make financial sense to hold off on your listing for a while as you may not be the only one looking to make a buck. If there are too many of the same product for sale, you are less likely to land a good price.