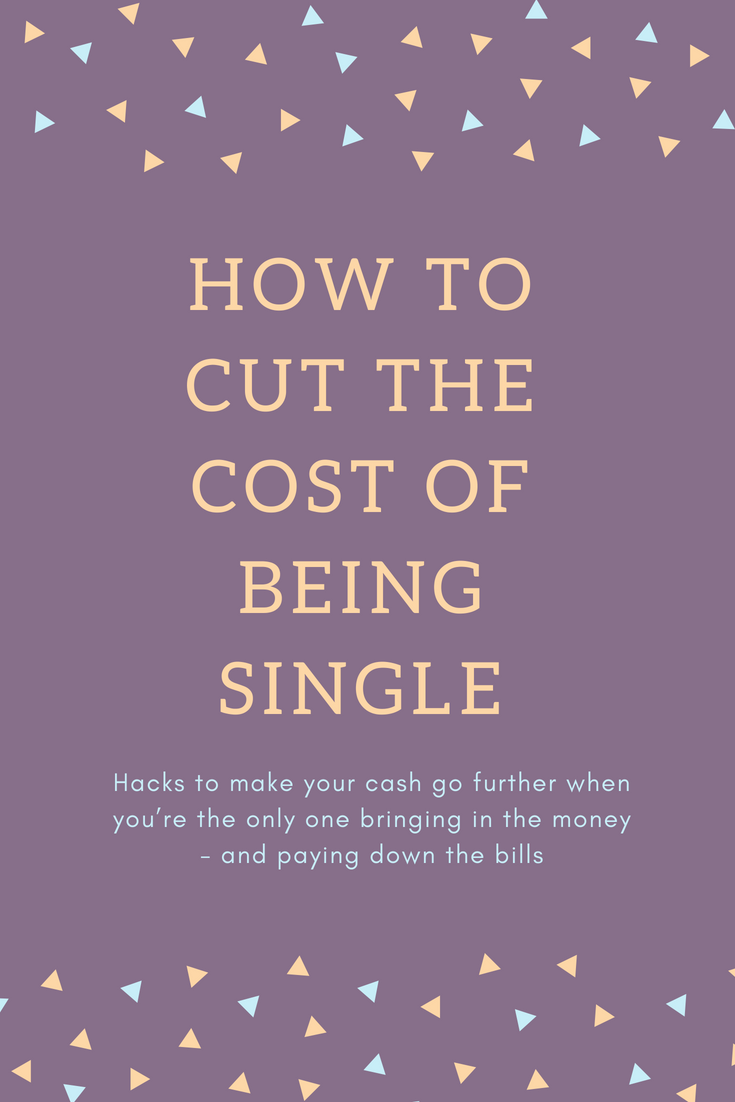 There are nearly eight million people living alone in the UK according to figures from the Office of National Statistics and it turns out that they are spending £21 a week more on average than those living as a couple.

And I should know, I am one of them.

Whether you’re single by choice, or as a result of a recent breakup or divorce, living on your own presents some unique financial challenges.

As you’re the only one bringing in the money – and paying down those bills – you need to be sure that you’re making the most of what you have.

Thankfully there are ways of keeping the costs down.

Fork out less for food

Cooking for one can be tricky – after all, not many recipes are created for a single serving, but rather catering for four to six people.

And while everyone likes leftovers every now and then, an entire lasagna or leg of lamb can take a while to eat on your own. But the single-size alternatives of ready meals that are so often peddled to solo eaters often cost more than the family-size varieties.

If you don’t want to waste food – or the money you’ve spent buying it – look at lovefoodhatewaste.com, which has a portion calculator. Plan a weekly food menu and use the website to calculate how much of each ingredient you need to buy on your food shop.

Once you’ve decided what you need to buy, put your shopping list into mysupermarket.co.uk It will then check supermarkets such as Tesco, Asda, Waitrose, Ocado, Lidl, Aldi, Morrisons or Sainsbury’s and determine which has the cheapest deal on the full list, allowing you to click on the shop of your choice to complete your order.

Further add to your savings an opt for the bigger recipe and freeze them ready to be defrosted for dinner – not only does it save time and money it also means you don’t resort to a takeaway if it’s been a long day.

Stop flushing your money down the drain

The Consumer Council for Water says that, as a rule of thumb, people living alone are most likely to benefit from having a water meter installed. The meter will be fitted free of charge and many water companies will now give you up to two years to trial a meter and switch back if you’re unhappy or not saving money.

To find out if you could save, visit http://www.ccwater.org.uk/watermetercalculator/.

Most households can have a water meter installed, but a water company can refuse to install a meter if it is too impractical or expensive to do so – in a block of flats, for example.

If you cannot have a meter installed, your water company should still be able to offer you an ‘assessed charge’ or ‘averaging’, where you pay a bill based on an estimate of your water use or what other metered customers in your area pay – this should work out cheaper than being charged at the standard rate.

Cut the cost of your council tax

Make sure that you are not paying more than you need to on your council tax bill. These unavoidable bills are calculated on the assumption that two adults live at a property, so if you’re the only adult in your household you’ll get 25% off your Council Tax bill.

To apply for a reduction from your local council, visit www.gov.uk/apply-for-council-tax-discount.

Get what you deserve

Many government-backed benefits are based not only on your individual wage, but also on total household income.

So if you live alone, this could mean that you are eligible for assistance unbeknownst to you. This is especially important if you have children as there are a number of tax breaks and benefits which are in place to help single parents meet the cost of childcare.

For this reason it’s definitely worth double checking your eligibility for benefits even if you don’t think you’d be entitled to receive anything.

To see if you are missing out, visit Moneysavingexpert.com’s handy benefits checker, which claims you need just ten minutes to complete.

Like most household bills, owning a car continues to get more expensive. If you are getting fed up with spending a fortune on fuel and insurance, why not join a car club to cut costs?

With zipcar.co.uk, motorists in cities and towns such as London, Bristol, Cambridge, Maidstone and Oxford can hire a car on a pay-as-you-go or monthly basis.

Depending on the model, the cost starts  from £3 per hour or £33 per day. Insurance and petrol for 60 miles a day are included in the price, additional miles from 25p (29p for premium vehicles and vans). For motorists in London, your rate also includes the Congestion Charge.

And finding a car locally is as easy as walking down the street to get a cup of coffee. In fact, there are seven times more Zipcar locations than there are Starbucks in London.

The savings are not to be scoffed at – the typical Zipcar member can save over £3,000 annually, compared to the cost of owning their own car.

Find a buddy to cut costs

If you are not ready to let go of your car, why not save money by finding a travelling companion? As there are 38 million empty car seats on the UK’s roads every rush hour, joining a carpooling scheme makes financial sense.

According to the research, drivers who shared their commute with three other people just three days each week could save an average of £791 each over the course of the year – with that rising to more than £1,000 in certain parts of the UK. And even those who shared just twice a week would save more than £500 over 12 months. Not bad, eh?

And finding a car buddy is easier than you would think. Liftshare.com, for instance, matches people with similar journeys in order to reduce the costs of motoring while alleviating congestion and pollution. What’s more, the site calculates a suggested price per passenger for your journey based on the length of your trip and using HM Revenue and Customs Approved Mileage Payment Allowance. Drivers can adjust the price within a capped window, to ensure passenger costs offset real costs and no profit is made – therefore not invalidating car insurance. The price set by the driver using this system is fixed and non-negotiable, making it simple and transparent for everyone involved.

Save on insurance costs

When it comes to motor cover, it may come as a surprise that single drivers are charged more than those with a spouse – sometimes twice as much.

Figures show that single men and women pay more for car insurance than their married counterparts – often around £100 a year more according to ComparetheMarket.com.

Married couples are considered less likely to claim because studies show that single drivers are at twice the risk of having an accident behind the wheel compared to people who are living in matrimonial bliss.

If you are not married and want to cut the cost of your insurance, consider adding a friend or flatmate who is a low-risk named driver – typically someone who is older, more experienced and free of recent claims or convictions – to your car insurance policy.

However, resist the temptation to say the low-risk motorists is the main driver as this is known as “fronting” and is against the law.

Holidaying alone can be an expensive business, with many hotels charging a lone traveller the same price as a couple, especially during the school breaks.

Single parents are especially affected. According to an investigation by currency exchange firm FairFX, in peak season a single parent travelling with a child can pay up to £500 more than if they were travelling in a couple

Single travellers argue that this penalises them unfairly, but tour operators justify the charge by saying that the cost of providing a room – heating, lighting, cleaning and so on – is the same regardless of how many people occupy it.

However, there is a growing number of travel operators that pledge not to charge singles supplement depending on the time of year. Worth a look are TUI,  Solo’s Holidays, and Just You.

If you are flexible with your dates, you might be able to find a cheaper room if you are prepared to travel out of season, when rates are lower and you can often persuade the hotel to waive the single supplement.