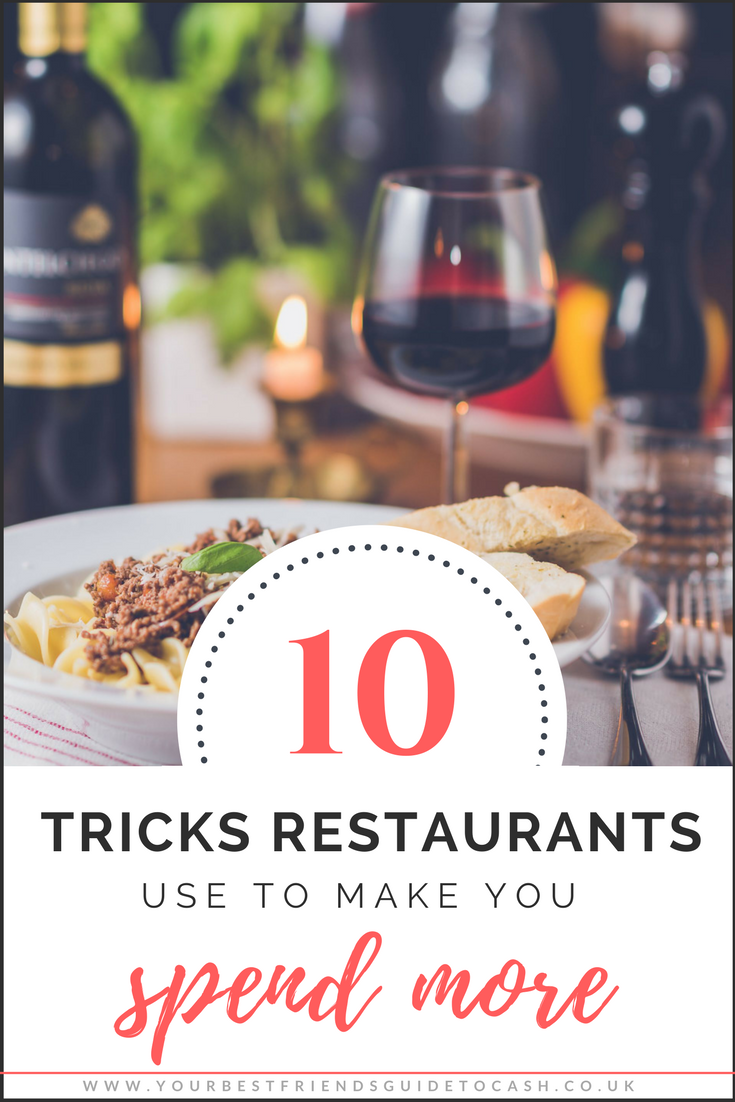 Whenever we go to a restaurant, how much we spend is intentionally influenced. Whether is is how the menu is designed or the way that the waiter serves you, all of it is intended to make you spend more.

But while restaurants use several clever ways to boost their profits, if you learn their tactics you can make some decent savings.

Here are ten tricks of the restaurant trade and how you stop falling for them.

1 DON’T BE FOOLED BY THE MENU

Most of us assume that, like a book, we read a menu from left to right. But studies show that our eyes gravitate toward the upper right-hand corner first and is often where the “anchor” – or the most profitable item – is located.

This ploy is more cunning than simply getting you to buy the most expensive item on the list – typically, having this usually expensive dish on the menu will make everything look reasonably priced in comparison.

What’s more, research suggests that the last part of the menu we look at is the bottom left-hand corner – and guess what, this is where the cheapest dishes will tend be positioned.

Also, the use of photographs and illustrations is also a large order driver and can increase sales of an item by as much as a third when there is just one picture on the page.

2 THE PROOF IS IN YOUR PINT GLASS

Did you ever notice how you only get beer served in a curved pint glass these days? Well, guess what, that is to make to spend more too.

Researchers found we drink beer faster from a curved glass than from straight ones because our brain tends to judge how much drink is left based on looking at how high up the liquid is in the glass.

For curved glasses, the top is wider and it is harder to pace yourself and judge how far you are through the drink – as a result, you will finish your pint much quicker than you expected and are more likely to want a refill.

3 WHEN CHEAPER CAN ACTUALLY BE BETTER VALUE

Speaking of booze, when out with friends for a meal, many of us will order the second least-expensive bottle on wine to avoid looking like a tightwad. Knowing this, restaurants place the highest mark up on that very bottle.

If you are eating out on a budget, chances are you’ll scour the menu carefully and choose one of the three cheapest dishes you can find. The restaurant industry is fully aware of this and, unsurprisingly, try to make it comparison more challenging for their customers.

For instance, restaurants will centre-align a list because if it was right-justified, the likes of you and me find it easier to compare the prices – often opting for the more affordable dishes. Cheeky.

5 WHERE ARE THE POUND SIGNS?

Have you ever wondered why menus seldom have pound signs on their pages?

6 DON’T BE FOOLED BY THE FREEBIES

You know those complimentary olives and tortilla chips offered by many high street chains? They were not set in front of you as a kind gesture, but rather to ensure that you order more drinks as the salt makes you thirsty.

7 GIVE THE SET MENU A SWERVE

The whole idea of “prix fixe” or the “combo” meals in fast-food restaurants is that, for a given price, it is harder to compare the value.

8 PAMPERING WITH A PURPOSE

While it may be nice to have a waiter who fills your glass before you can even ask, bear in mind that they  may be trying to sell another bottle of wine by timing it so it is empty in the middle of the meal when you are likely to order another.  And asking you if you’d like another cocktail when you have a couple sips left might seem like an innocent question, but you’re also more likely to just say “sure!” than you might be to order another on your own.

What’s more, the way the server acts toward you, their gender and what they wear can influence your spending.

People have been shown to tip women wearing red more, to tip more if the server draws a smiley face on your bill, or if they touch the person paying bill on their shoulder. This is the so-called Midas touch effect – so don’t fall for their flattery.

9 MUSIC TO YOUR EARS – WHICH WILL EMPTY YOUR POCKETS

You probably never paid much attention to the background music that is played in a restaurant, but even the genre of music is adjusted to influence your spending habits.

For instance, if it is selling both French and German wine, but the French bottle happens to be much more expensive, playing French music is likely to bias the their customers toward buying the costlier wine.

Research from the University of Leicester found that playing classical music, associated with affluence, encouraged spending, while a lack of music caused diners to spend drastically less.

10 THE WAIT STAFF PREY ON YOUR GOOD MANNERS

Many waiting staff are far from innocent when it comes to encouraging you to overspend.

To be good at their job – and make more tips – a good server knows the importance of the “up-sell” – or getting a customer to spend more than they originally intended.

One trick of the trade is to verbally list the specials, typically without mentioning price as this is likely to increase spending because we are too embarrassed to ask in front of others.

According to a report published by website Rue89, in which Parisian servers admitted to the tricks used to inflate customers’ bills, this relies on the fact that the customer is unlikely to remember the first two choices and, to not look rude, will not ask to have them repeated.

What’s more, many restaurants incentivise servers to push particular dishes more than others; for instance, whoever sells the most servings wins a prize. So be on the lookout for a server who’s especially jazzed about one specific dish – and take his or her suggestion with a grain of salt.

Don’t be fooled into thinking that the “specials” are that special as, typically, these dishes are made from leftover ingredients, or food that is set to expire soon.

This doesn’t mean they will necessarily be any cheaper as they often cost just as much as a regular-priced meal.